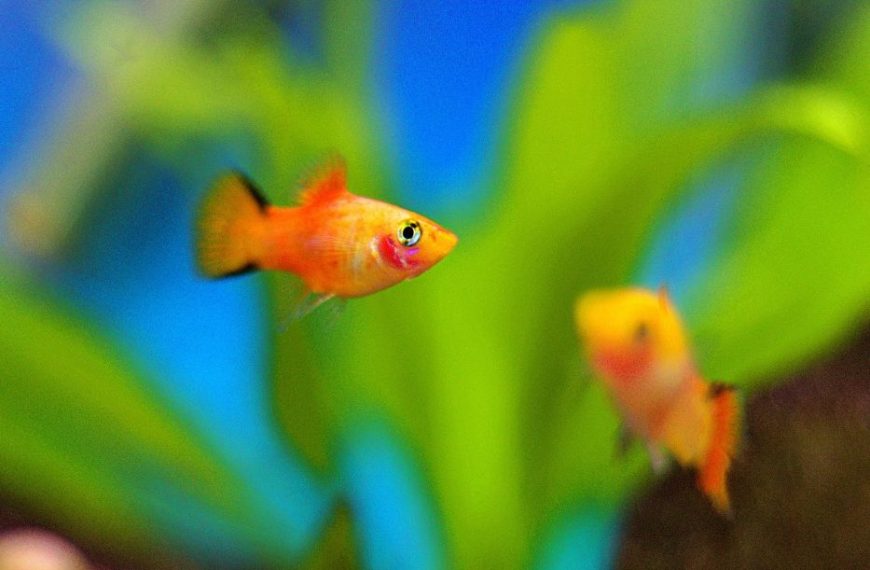 Platy fish are a common fish species in the aquarium trade. You’ll find them in most fish tanks because they are low-maintenance, beautiful, and fun to watch because of their vibrant color.

If you are planning to get platy fish for your tank, this article will provide a detailed guide about the tank setup, diet needs, tank mates, and how to breed them.

There are two platy fish species; the variable platy and the Southern platy. However, the two species have been cross-bred to create different color variations that are popular today. As a result of the interbreeding, its difficult to distinguish between the two species.

Platy fish are originally from Central America and Mexico. Wild platy fish are less colorful than the platies sold for aquariums. Both the variable and Southern platy are popular in the wild and among aquarists. The International Union For Conservation of Nature classifies variable platy fish as a “least concern species”; however, it does not have data on the Southern platy.

Introduced into the trade more than 100 years ago, platies have become a favorite for seasoned hobbies. They are part of the Xiphophorus genus and Poeciliidae family, which includes guppies, mollies, and swordfish.

Platy fish are easily recognizable thanks to their flat and short bodies. They also have triangular-shaped heads and fan-shaped tails. The platy has a thick tail section compared to other similar-sized fish species.

Due to cross-breeding, you’ll encounter different types of platy fish with distinct colors and patterns. While some are readily available at the local pet store, you must seek a specialty breeder for others.

Here are the common platy types.

Platy fish are sexually dimorphic; therefore, you can tell the differences between males and females. The male is usually smaller than the female because females grow much longer, making it easy to differentiate them in the tank.

While the males grow to an average size of two inches, the females can grow up to three inches. Because of their small size, they can fit in a smaller tank without any issues.

If you have a community tank, platy fish is a perfect addition due to their peaceful nature. They get along with other fish species, are playful, and don’t show any signs of aggression. However, you might notice some infighting, especially between the males. Males pester females a lot, and they show aggression toward fellow males during the breeding period.

To prevent this, ensure that the females outnumber the males in the tank. Although they are not schooling fish, they are more confident when kept in groups of about six. Generally, they are easygoing and spend their time swimming in the tank.

When choosing tankmates for your platys, the ideal choice is other platies. Keeping them in groups ensures that they don’t get anxious or shy.

A group of six platies will do fine in a 10-gallon fish tank. However, you can still get a bigger one since the platies are active.

When setting up the tank, ensure the parameters are ideal for survival. Keep the pH levels between 6.8 and 8.0 and water hardness between 10-28dGH.

To mimic their native environment in Central America, add a layer of the substrate like standard gravel, plants for shelter, and a few rocks and driftwood for decoration.

As omnivores, platies are not picky eaters. To keep them healthy, stick to a diet with commercial pellets or flakes.

You can also add healthy vegetables such as lettuce, cucumber, and spinach to the daily meals. Additionally, you should occasionally feed them frozen and live foods like bloodworms and brine shrimp.

Platies eat within three minutes. You can remove the excess food once they are done eating.

Platy fish are livebearers which makes them easy to breed. To make breeding easy, ensure the tank has dense vegetation and a trap to protect the fry.

You should set up a separate breeding tank to protect the fry. Place the female in the breeding tank when the gravid spot starts showing. The fry will be born after four to six weeks; therefore, you should keep an eye on the tank.

Platy fish species are an excellent choice if you are a beginner aquarist. They are easy to maintain and breed. Additionally, they are peaceful; therefore, you don’t have to worry about adding them to a community tank with other friendly varieties.