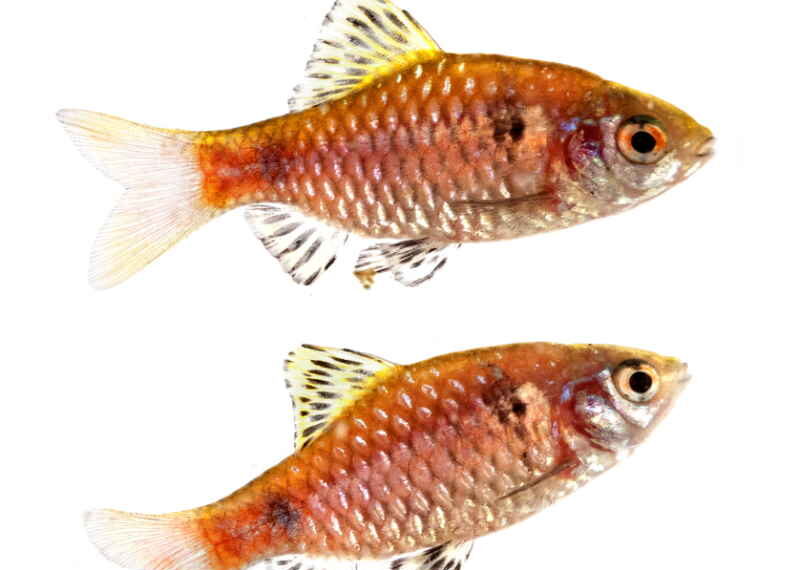 The Odessa Barb is a good option if you are looking for freshwater fish species to add to your aquarium. They are peaceful and colorful fish varieties, making them a favorite among aquarists. Therefore, even if you are a beginner, you can easily take care of the Odessa Barb.

In this guide, we’ll take a closer look at the tank requirements, diet needs, and breeding habits of the Odessa Barb to help you get started.

Although this fish species is from Myanmar, it got its name from Ukraine. They get their name from the city of Odessa because this is where they became popular within the fishkeeping community before spreading to other parts of the world.

The Odessa Barb is a freshwater fish species from Southeast Asia. They are commonly found in streams and oceans in central Myanmar. In addition, they can also be found in countries like Nepal, China, India, and Thailand.

Their native habitat has lots of vegetation, and the water is slightly acidic. The water has a moderate current, making it easy for the fish to navigate. Odessa Barbs are pretty active; therefore, they spend most of their time looking for food at the bottom of the rivers and oceans.

Odessa Barbs are popular among hobbyists because of their attractive and unique colors. They have a faded orange-reddish line that begins near the eyes all the way to the caudal fin. This fish also has a vertical black streak on the part of its back.

The rest of the body is slightly metallic silver. The red and silver combination gives Odessa Barbs a stunning appearance.

Generally, the body of the Odessa Barb is oval-shaped with thick scales. In addition, some of them have dark spots behind the gill backs. From a distance, they appear translucent with red colorations.

This fish variety is sexually dimorphic; therefore, you can easily differentiate between males and females. The males are more colorful, while the females have a light goldish brown coloration without the red colors.

You can know the difference by checking the size of the body. Females are bigger and have a more rounded body shape.

As adults, Odessa Barbs are about 3 to 4 inches. This size is typical for most barb species. However, you need to know that the size of these fish varieties is influenced by genetic components and the quality of care provided. To keep them healthy and within a good size, ensure that you buy Odessa Barbs from a reliable seller.

Generally, Odessa Barbs are active and peaceful varieties. However, there are some situations when this fish will show aggressive behaviors. This happens if you keep the fish alone without company. On some occasions, they might show these characteristics during the breeding process.

Odessa Barbs entertain themselves; therefore, they tend to mind their own business in the tank. Unlike other freshwater species, Odessa Barbs are quite active and will swim across all levels of the aquarium. Since they are shoaling fish, they move together as a group.

Since Odessa Barbs are peaceful, there are plenty of options for tankmates. They can easily get along with other non-aggressive fish species.

You can keep them in a community tank with species such as Cherry Barbs, Neon Tetras, Chili Rasboras, Ember Tetras, Bolivian Ram Cichlids, Harlequin Rasboras, and Bristlenose Plecos.

Additionally, as you add other bottom species, like freshwater aquarium snails, you need to be careful. Some aquarists have made this work by using a large tank; however, it’s not always successful.

If you are planning to keep Odessa Barbs, the minimum tank size is 30 gallons. However, you can also keep them in a larger tank if you have space. This will be convenient because they are active fish that need a lot of room to swim.

As you set up the tank, try and mimic the natural habitat. In the wild, Odessa Barbs are used to a lot of vegetation; therefore, you should add plants to the tank. In addition, you should add other materials like driftwood, caves, and rocks. However, keep in mind that Odessa Barbs enjoy swimming, so avoid overcrowding the tank.

Although Odessa Barbs are omnivores, you should consider their diet and provide variety. In addition, they have an appetite because of their activity level; therefore, you need to feed them properly to keep them healthy.

Your diet can include good flake food as the base. You should add vegetables and meaty foods such as bloodworms, brine shrimp, daphnia, lettuce, and cucumbers.

To avoid overfeeding your Odessa Barbs, have a consistent schedule and track the amount of food you add to the tank. Remove any extra food to maintain the water quality.

Breeding Odessa Barbs are pretty easy to breed because of their sexual dimorphism. Once you identify the male and female you want to breed, set up a separate breeding tank.

Odessa Barbs are an easy fish species to care for. They are ideal for aquarists at all levels due to their low maintenance needs. They are a great choice if you want to add an active and beautiful fish to your community tank.