How to Prepare Lava Rock for Aquarium: A Full Guide

Lava rocks are an excellent addition to any aquarium. They provide a natural looking environment for your fish, and they also help with filtration! In this article, we will cover how to prepare lava rock for aquarium.

We will also touch on some benefits of adding lava rocks to your fish tank.

Preparation of lava rocks for aquarium

Before you dump the lava rocks into your aquarium you want to make sure they are safe for your fish. You’ll do that by following these steps:

Benefits of adding lava rocks to your aquarium

There are many benefits of adding lava rocks to your aquarium. 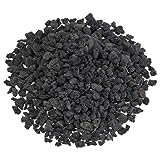 They provide a natural hiding place for fish and other animals in the tank. Lava rock also provides texture, so you can create caves or ledges that will allow your fish to explore their surroundings while remaining hidden from view!

Lava rocks can provide them more space, which is a good thing, as they’ll be less likely to nip at each other if there’s plenty of room! This can also prevent constant battling over territory.

Another benefit of lava rocks is the lower nitra levels. Lava rocks filter out nitrates by the process of biofilms, which are colonies of bacteria that thrive in moist areas with a source of nutrients and oxygen.

Biofilm is used for its ability to trap or hold onto substances such as ammonia where it becomes less toxic over time. This means that your water will be cleaner and clearer!

One last benefit you’ll receive from lava rocks is their natural stone aesthetic; this can help create an awesome atmosphere!

How to pick the correct lava rock

When you’re picking a lava rock for your aquarium, you’ll want to look for the following:

These things can risk your aquarium’s structural integrity and kill off some of its inhabitants! So make sure that it has never been treated with a chemical before adding it into your tank.

Another thing to keep in mind when looking at lava rocks if they’re from an older application (more than one year) then make sure they’ve had time enough to break down their ammonium nitrogen content. This will eliminate nitrates being released into the water column which would harm aquatic life in your fish tank.

To sum up, lava rocks are an easy and cost-effective way to add substrate in your aquarium. They also offer a variety of benefits that you may not be aware off such as providing more surface area for bacterial colonization which helps filter the tank water by removing nitrates from it. They also provide cover for your fish and a place to take shelter when they’re feeling stressed.

Finally, lava rocks are aesthetically pleasing and can help with the look of your aquarium which is always nice!

My name is Jason Matthews and welcome to my website. When other kids were bragging about how their dog could sit and roll over, I was bragging about my latest Betta Fish and the cool sea castle I just added to his aquarium.