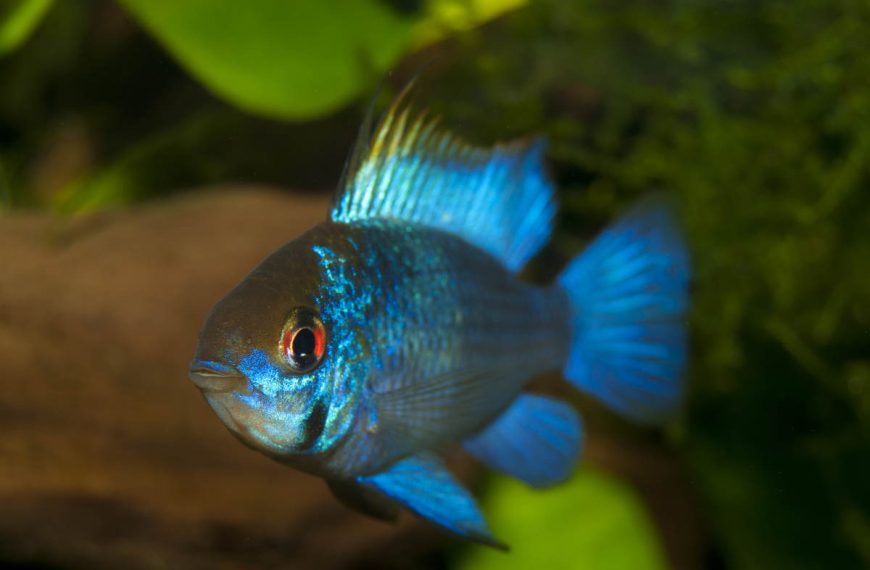 If you are planning to get the German blue ram for your fish tank, you need to know the exact needs of this breed to give them the best care. Here’s a detailed guide to get you started.

Despite being called German blue ram, these fish species are not from Germany. The “German blue” refers to the color variation of the ram cichlid selectively bred in Germany. This was then popularized globally in the aquarium trade.

German blue rams are originally native to South America, especially in Venezuela and Colombia. The species is commonly found within the Orinoco River basin. In the wild, they live in water bodies that are warm, densely vegetated, and acidic. In addition, these areas are sheltered from the sun.

These fish species prefer water bodies that are slow-moving and murky. These areas usually have plant matter for them to hide in and find food. Unlike most species, German blue rams have a significantly stable population in the wild; therefore, they are not considered endangered.

One of the distinctive characteristics of the German blue rams is that they are very colorful. Their bodies have a mix of colors from blue, yellow, red, and orange.

You’ll notice that they have black stripes, red fins, and blue dots. The dominant color on the front part of the body is yellow, while the back is mainly blue. However, there are different color variations which include:

German blue rams have the same classic fin shape that is common in cichlids. Although they are smaller, they have an angled semi-rectangular dorsal fin and a wider caudal fin.

On average, German blue rams grow to about 2-3 inches in length as adults. However, in the wild, they can grow to about 4 inches.

One of the reasons hobby aquarists love German blue rams is because they are peaceful. They are active and social fish that spend most of their time in the mid and bottom levels of the tank. In the wild, they commonly hide among the rocks and dense vegetation.

They keep to themselves, and you’ll often see them digging through the substrate or hiding among the plants in your aquarium. During the mating season, they can get territorial; therefore, keeping more females than males in a tank is advisable to minimize aggression.

Due to their peaceful nature, German blue rams are ideal for a community tank. They get along with similar-sized and friendly fish varieties.

Avoid stocking them together with larger aggressive species. The other thing to consider when choosing tankmates is similar water quality parameters.

German blue rams are only recommended for advanced hobbyists that can maintain strict water quality requirements. To keep this fish species healthy and alive, you’ll need to stick to a regular maintenance schedule and adequately test your water.

To avoid issues, the water temperature should be between 74-82F, pH levels should be from 5-7, and water hardness should be 6-14 dGH.

It’s necessary to perform partial water changes consistently. The ideal way is to change about 20% of the water weekly. Your aquarium should include lots of plants that German blue rams use to hide; therefore, you should add this to avoid stressing them.

Furthermore, since they spend considerable time digging up the substrate, consider adding a sandy option. This will protect them from getting cuts or scratches. When you add lighting, it should be dim most of the time.

Feeding German blue rams is not challenging because they are omnivores. You can have flake or pellet food from quality sellers as part of their diet. It would be best to supplement the diet with brine shrimp, bloodworms, and tubifex.

Once you add these fish species to the tank, they take a while to get used to it. This makes it hard to feed them. When this happens, consider feeding them frozen protein-rich foods until they adjust.

Breeding this species is very simple. You need a separate breeding tank to allow you to vary the water temperatures and quality. This also helps keep the peace because they tend to be territorial during the mating season. German blue rams breed in slightly acidic conditions and warm water; therefore, you should provide these parameters.

Once fertilization happens, the eggs will hatch in 3-4 days. Once the fry is out, you can feed them brine shrimp meant for children until they are stronger.

While the German blue ram is an ideal fish species for your aquarium, it might not be suitable if you are a beginner. However, once you understand how to maintain the water parameters, they are an excellent addition to your tank.