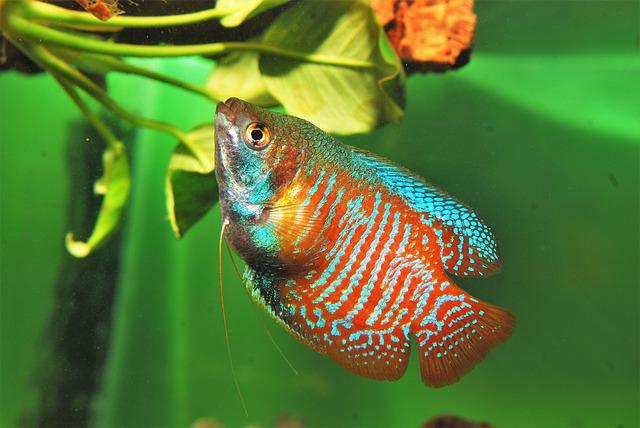 The dwarf gourami is one of the most beautiful aquarium fish species. They are popular among aquarists because they are easy to maintain and don’t require a lot of work to bring them up. Their peaceful temperament makes them a great addition to your community tank.

Like all other fish species, you need to know how to take care of them properly, their diet needs, tank requirements, breeding habits, and typical behavior. Here’s a guide to get you started.

Like other gouramis, this fish species is included in the labyrinth fish order, also known as the Anabantiformes order. Fish species in this category have a unique lung-like organ that allows them to breathe oxygen straight from the air.

These majestic-looking fish species are native to South Asia’s slow-moving rivers and lakes. They originated from India, Bangladesh, and West Bengal. In the wild, you’ll find them in heavily vegetated waters, where they are commonly found together with other members of the gourami family.

Today, dwarf gouramis can be found in Singapore, Colombia, and the USA. They choose to stay together because they are schooling fish.

Dwarf gouramis are known for their unique colorful appearance. Several mutations have appeared over time, thanks to selective breeding at fish farms. Here are some of the common dwarf gouramis variations you’ll come across.

Male dwarf gouramis are more colorful than their female counterparts. As they mature, the males develop an elongated dorsal fin. However, females have shorter fins ad are more rounded than males.

Generally, dwarf gouramis are peaceful. They thrive well in tanks that contain non-aggressive fish species and similar-sized fish. As long as they are compatible in temperament, dwarf gouramis will co-exist peacefully.

The ideal tankmates for dwarf gouramis are species that dwell near the bottom of the tank. This will liven up your fish tank and maintain territorial equilibrium. If you stock them with other brightly colored species, it can cause the male gouramis to become aggressive because they consider them rivals.

Some fish varieties to consider for your dwarf gouramis include tetras, catfish, loaches, rasboras, swordtail fish, and mollies. You can also add bottom dwellers such as sparkling gourami and pearl gourami. Avoid active fish like barbs because they will create competition for food in the tank.

Ensure that the tankmates have the right chemistry with dwarf gouramis to avoid competition. Therefore, once you introduce a new species in the tank, keep an eye on the tank to identify any aggressive behaviors.

In the wild, dwarf gouramis prefer living in slow-moving water bodies with dense vegetation. However, they swim to seasonal pools during breeding with a lot of light, heat, and nutrients. To keep them healthy and comfortable, you should strive to mimic these conditions in your aquarium.

As you set up the tank, the minimum size is 10 gallons for up to 3 fish. If you have about five or more fish, you’ll need to get a 20 gallons tank.

The size increases depending on the number of fish you plan to keep together. If you keep this fish species in a tiny tank, it could lead to a spike in ammonia which can be fatal to the gouramis.

Keep your aquarium temperature between 72-82F, pH at 6-7.5, and water hardness between 4-10 dGH. Additionally, you need to add floating plants to block intense light. However, you should leave enough space for the dwarf gouramis to reach the surface to breathe.

To keep dwarf gouramis healthy, you must choose the right food type. Fortunately, they are omnivores because they are not picky eaters.

In the wild, they feed on larvae, small insects, and algae growth on rocks. Since they swim to the surface to breathe, they hunt insects that fly near the water bodies.

In captivity, you can feed them flake food, frozen foods, freeze-dried foods, and vegetable tablets. You can also give them foods such as worms to keep them healthy.

To avoid contaminating the tank, ensure that you feed them only what they can consume. You should remove any leftovers after a few minutes.

You can breed dwarf gouramis in the same tank or use a separate breeding one. It’s advisable to separate them if the tank mates are highly likely to disrupt the breeding process. Dwarf gouramis are ready to reproduce after six months when males begin building their egg nests.

During breeding, you need to pay attention to the water temperature. Ensure the temperature is between 82-86F. Keep all the factors consistent to increase the chances of breeding.

Dwarf gouramis are a great addition to your fish tank. They are beginner-friendly because they are peaceful and require little maintenance. Because of their bright colors, dwarf gouramis will liven up your aquarium.