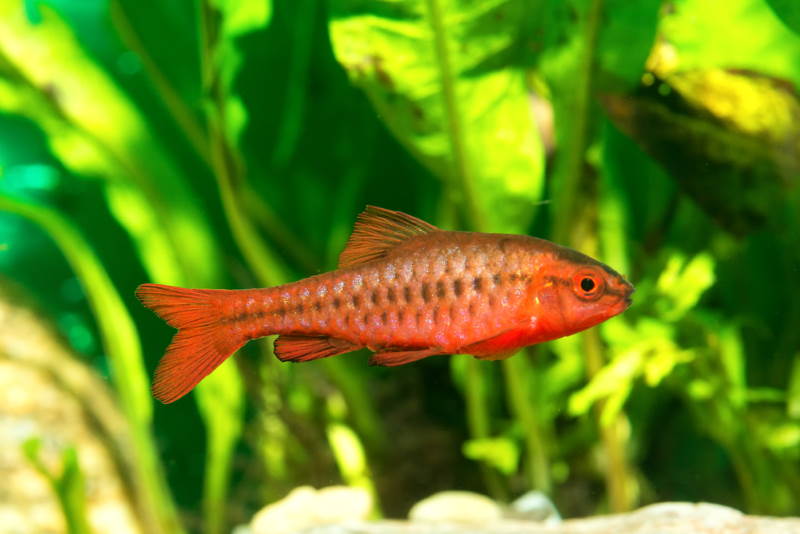 If you just got cherry barbs, here’s a guide on what to feed them, temperament, appearance, breeding, and tank requirements.

Cherry barbs are common in several countries. In Sweden, they are known as kopparbarbs, stregbarbe in Denmark, titeja in the Czech Republic, and vishnevyi puntius in Russia. Most of the cherry barb rearing takes place either in Florida or Asia.

This fish species is native to Sri Lanka. They mostly inhabit the tropical Nilwala and Kelani river basins. In addition, they have also been found in Mexico, Colombia, and Panama.

Since they are popular in the aquarium trade, their population is declining due to climate change, shrinking natural habitat, and excessive harvesting. They are now categorized as vulnerable on the IUCN Red List.

Like their name, the cherry barb is bright cherry red from head to toe. They are torpedo-shaped with a forked tail and a singular dorsal fin. You’ll also notice that they have a horizontal stripe that extends from the mouth to the tail. However, this line can appear dotted due to scales and fading.

Wild cherry barbs are more colorful than the ones bred in captivity. When they get sick or stressed, cherry barbs lose their red coloration. Due to breeding, there are other color morphs, such as super red and albino.

It’s easy to distinguish between male and female cherry barbs. During spawning, the male color variations become more vibrant. They also tend to stay slender, while females have rounder bodies. Additionally, females are paler and have a darker lateral line.

When fully grown, the maximum size of a cherry barb is about 2 inches. However, if you don’t provide the best level of care, your cherry barb might stop growing at 1 inch. This is also dependent on genetic factors.

Generally, cherry barbs are active fish that will spend their time swimming in the middle and top levels of the tank. Since they are schooling fish, it’s common to see them swimming together in groups. They tend to feel much safer as a group than on their own.

On occasions, cherry barbs can be timid, so they need plenty of hiding spots in the tank. However, they are generally peaceful and will fit your community tank well. However, they can become a bit aggressive during breeding.

Males chase other males to establish dominance; therefore, you should have more females in the tank than males.

Due to their peaceful nature, cherry barbs can be stocked together with other peaceful species. In addition, as schooling species, they should be kept in groups of 5-6. Their tank mates should not be aggressive and have the same tank conditions as cherry barbs.

Cherry barbs are easy to care for because they tolerate different water conditions. Ensure that you put them in a tank that mimics the natural habitat.

In the wild, cherry barbs live in shallow waters that are acidic, slow-flowing, and sheltered. Since they tend to be shy, the tank needs to have lots of places to hide in the tank.

These fish species stick in a group; therefore, you should have multiple hiding spots to accommodate more than one fish. To make this possible, you can have a planted tank with plenty of spots to hide.

When choosing a tank, the size should be 25 gallons or larger. Ensure the temperature is maintained between 74-79F, a pH of 6 to 7, and water hardness of 2 to 18 dGH.

Although cherry barbs can tolerate water changes, you should keep the parameters stable to avoid stressing the fish. Constantly check the parameters to keep the fish healthy.

As an omnivore, the cherry barb is quite flexible. They will eat anything they can find. This fish species feeds on plant matter, algae, crustaceans, and small insects in the wild. However, in captivity, you can feed them flakes, pellets, live and frozen foods, vegetables like zucchini, and other protein-rich meals meant for fish.

You can feed them two to three times a day and ensure they only eat for three minutes. Cherry barbs can eat anything and have a huge appetite, so you should be careful not to overfeed them. Once they are done eating, remove the leftovers to avoid contaminating the water.

Turn up the water temperatures to get your cherry barbs interested in breeding. Prepare the breeding pair by feeding them live and frozen foods.

Move the pair into a separate tank to make way for spawning. Egg-bearing females will be noticeably plump. Once the eggs have been deposited, remove the parent pair before they eat their eggs. The eggs will hatch in 48 hours, and the fry starts swimming the following day.

The cherry barb is an easy fish species to care for. They are peaceful, so you won’t have a problem if you have a community tank. They are tolerant to water fluctuations and are not prone to diseases, making them ideal for beginners.