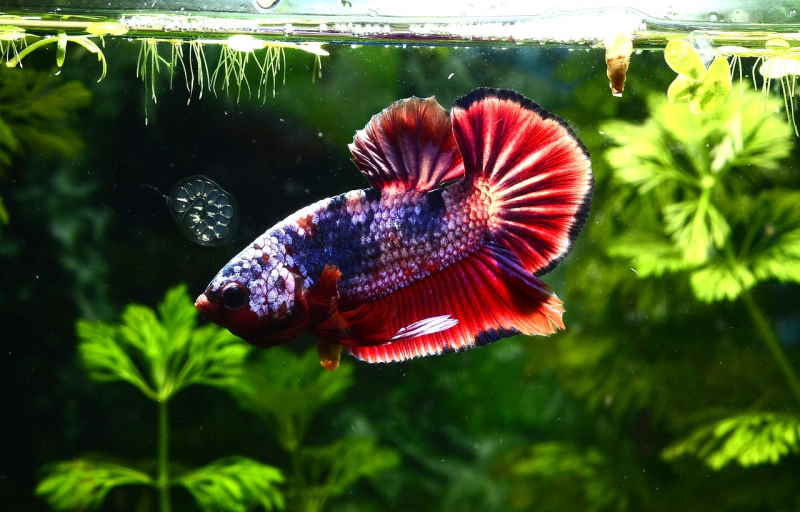 Bettas are popular pet fish as they come in beautiful colors and patterns, are relatively low-maintenance, and can be very entertaining to watch. But where do bettas originate? And what other facts are there about these adorable creatures?

Betas, also called Siamese fighting fish, are popular for their aggression and territorial nature. These brightly-colored omnivores originate from South Asia, where they inhabit rice paddies and stagnant ponds. They typically grow to about 3 inches long and have a 2-5 years lifespan.

In this blog post, we’ll explore the origins of betta fish, their characteristics, and some other fun facts about them. So dive in and learn something new today!

Contents show
Overview
Characteristics
Interesting Fact
What is a Betta Fish?
Origin
Habitat
Size
Appearance
Tail Shapes
Behaviour – Fierce fighters
Sexing
Breeding
Life Span
What Do Betta Fish Eat?
What are the minimum tank size and other housing requirements for a betta fish?
Bring Some Color to Your Aquarium With Low-Maintenance Bettas!

The Betta splendens, more commonly known as betta fish, is a freshwater aquarium fish prized among many aquarists for its brilliant colors, decorative fins, and willingness to fight.

While all betta fish share these qualities to some degree, they are significantly more prevalent in captive bettas. This is because they have been bred specifically for those traits over the past several hundred years.

In the past, bettas were captured and bred to fight for human entertainment, just like cockfighting. This sport was so popular among Thai royalty that the former King of Siam had it regulated and taxed! The name “betta” is derived from an ancient clan of warriors called the Bettah.

What is a Betta Fish?

Betta fish, also called Siamese fighting fish, have been domesticated for centuries. They are among the oldest species of domesticated fish. Betta splendens is their scientific name—a name that originates from two languages:

The most commonly found betta fish in aquariums and pet stores is this species; however, there are more than 70 relatives of this kind of betta fish, including the endangered Betta miniopinna and Betta Persephone.

Betta fish are a tropical species of freshwater fish that originate from Southeast Asia. They can be found in countries such as the northern Malay Peninsula, central and eastern  Thailand, Malaysia, Indonesia, Vietnam, Laos, and Cambodia.

Bettas are known to live in areas of shallow freshwaters, such as marshes, rice paddies, stagnant ponds, and streams with little movement. They can also survive in water with low levels of oxygen by going to the surface and taking quick breaths of air when needed.

Did you know that when Betta splendens first hatch, they use their gills for breathing in oxygen? The ability of the species to get oxygen from the surface develops later on in life and is a result of something called a labyrinth organ. This organ functions similarly to human lungs and is attached to the gills.

Bettas are unique among fish and often stand out in storage tanks for their beautiful colors and patterns. These creatures typically grow to only 2-3 inches in length, making them one of the smallest freshwater fishes kept as pets.

The Betta splendens fish is distinguished by its bright colors, pretty fins, and various types of tails. Betta fish come in a variety of colors, from common ones like red, blue, and black to rare hues like metallic copper and turquoise. Some have solid fins while others are multi-colored.

It’s no wonder that tails are one of the most appealing characteristics of Betta fish, and often the first thing we notice about them. There are hundreds of tail types, shapes, and sizes, as well as different types of Betta fish. Here are some of the most amazing ones:

In the wild, male betta fish are territorial and will attack other males out of instinct. They spread their fins and puff up their gills to look bigger before a fight. These fights can be violent: The fish bite each other’s fins until one either surrenders or dies.

Betta splendens are sexually dimorphic means male and female fish differ in both color and size.

When ready to mate, male and female fish chase each other. The male may nip at the fins of the female before they embrace. He then flips her upside down and wraps his fins around her. As she releases eggs, he fertilizes them.

The female usually swims away after she lays her eggs. Then, the male scoops up the eggs in his mouth, spits them into the nest, and watches over them until they hatch–which takes about 48 hours. A few days after the fry have hatched and can swim on their own, their father departs.

Betta fish are commonly seen as low-maintenance, but they still require a certain level of care to stay healthy and safe. If given the proper amount of attention, they can live 2-5 years on average in captivity and even up to 2 years in the wild.

What Do Betta Fish Eat?

Betta fish are omnivores, meaning they love to eat insects and insect larvae. Even though plant roots are food for them, a diet like this is inadequate because it lacks the proper nutrients that bettas need to stay healthy.

A good diet for your fish should consist of various options, such as dried bloodworms, brine shrimp, or daphnia. This will help them stay healthy and balanced. If they only consume plant roots, the lack of nutrition will eventually make them ill and cause their death.

Commercial betta food pellets are the best option for your betta because it contains a combination of all three essential foods, as well as vitamins and minerals. With this type of food, your betta’s coloring will be more brilliant and it will have a longer lifespan.

What are the minimum tank size and other housing requirements for a betta fish?

As a thumb rule, no fish should be placed in a tank smaller than 10 gallons. However, bettas are an exception and can live in a body of water as small as 2 or 5 gallons but it’s always best to provide them with more room to swim, and the following conditions must be fulfilled.

Bring Some Color to Your Aquarium With Low-Maintenance Bettas!

Bettas are popular pets for people looking for easy-to-care fish. They’re chosen often because of their beautiful, vibrant colors and long, decorative fins—similar to other ornamental fish. If you’re just getting started with taking care of fish or if you have years of experience, bettas make great pets!

Bettas are frequently considered easy to care for but this idea can lead to people not paying enough attention to them. It’s important to remember that if you have two male bettas living together, aggression might happen. To ensure your betta is always healthy and content, they’ll need a spacious tank as well as some plants for mental stimulation.